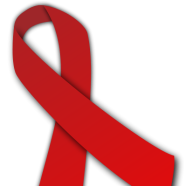 “Are street rats and lab rats the same?”

“What happens if I eat a rat brain?”

These are some of the questions that my lab encountered when we visited a middle school in Escondido, CA as classroom speakers last week. Together the Mandyam Lab – a professor, a post-doc, a Ph.D. student, and a Master’s student – took on the task of explaining how drugs affect and damage the brain. We got a lot of great feedback from both students and teachers, so we would like to share our secrets to getting a group of young teenagers engaged and learning about neuroscience, which is not always an easy task.

What is Red Ribbon Week?

Our presentation was part of Red Ribbon Week, which was established by the National Family Partnership (AKA the National Federation of Parents for Drug Free Youth) to provide awareness and prevention of drug abuse and drug-related violence after the torture and murder of DEA Agent Enrique Camarena in 1985 [1]. During the end of October, many schools in the United States observe Red Ribbon Week, and speakers often include police officers (and their dogs), counselors, and scientists. Students participate in activities that promote awareness of drug abuse as well as community.

As one of the school counselors walked us through the halls, he described Red Ribbon Week as a sort of school spirit week with specific themes for each day in order to engage the students. During each day, students were encouraged to wear specific outfits or costumes such as jerseys from their favorite sports teams or shirts with their favorite super heroes. The counselor also described activities aimed at getting students to talk about drug use with their friends and families by signing and posting pledge cards to stay drug free. Students displayed these pledges on a wall full of colorful cards, each representing a promise of abstinence from drug use.

Last year, Dr. Chitra Mandyam spoke to students at Hidden Valley Middle School about the cycle of drug addiction and how drug abuse affects neurogenesis – the ability of the brain to develop new brain cells (depicted below[2]). Drugs like alcohol and methamphetamine, studied by the Mandyam Lab, negatively affect the growth and development of newborn neurons in the hippocampus – the part of the brain important in memory formation. Take home message: Drugs kill important brain cells. But how do we make sure these middle school students get that message? 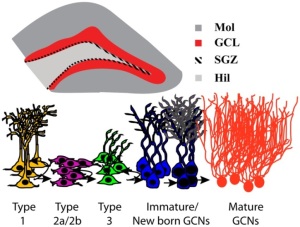 This year Dr. Mandyam wanted to try something different. Instead of boring the students with a 30-minute slide show saying “don’t do drugs” with pictures of abstract brain slices, she wanted to get the students to participate in the discussion of drug abuse and the brain.

In order to the engage students, we turned to items in the lab and formed lessons around the objects we found: a perfused brain of a rat addicted to methamphetamine, a brain of a normal rat, a model of the human brain, and a slide with rat brain slices stained for different markers. These were things the students could see and hold in their own hands, which was critical to the impact of the lesson.

The students rotated between three stations:

1) Human brain anatomy – Students took apart a colorful rubber model of an adult human brain and played with an iPad app to learn which parts of the brain are affected by alcohol abuse and how the human brain compares to the rodent brain. Here, we also discussed human research and rodent research, and why we cannot do certain studies on humans.

2) Rat brain anatomy – Students wore real lab gloves and touched real rat brains to compare the addicted brain to a normal brain while learning why we use rats in order to study drug addiction. This was the station where we got the most interesting questions about eating brains.

3) Cell types in rat brain slices – Students looked at slides with real rat brain slices and saw magnified pictures of slides showing the difference between neurons and glia in the rat hippocampus. Students learned about neurogenesis and how it is affected by drug abuse. Ideally we would have brought an actual microscope that the students could look through, but they were able to hold and look at the slides we actually use in the lab.

At each station we gave a ten minute presentation and asked the students guiding questions to relate the knowledge of the previous station to the current station. The middle schoolers asked their own questions about the brain, drug use, lab research, and general college experiences. Some of them led us to discuss briefly about deeper topics such as the ethics of using lab animals and the role of environmental enrichment in drug addiction. I was impressed by their level of understanding and interest in our lab’s research.

These are really bright kids who just need the right kind of teaching aids to get excited about learning. I would highly recommend discussing neuroscience with younger students, even if the brain sounds like a complicated topic – they may know more than you would expect.

1. Kiki and the History of Red Ribbon Week. http://www.justice.gov/dea/redribbon/RedRibbon_history.shtml

2. Mandyam, C. D. (2013) The interplay between the hippocampus and the amygdala in regulating aberrant hippocampal neurogenesis during protracted abstinence from alcohol dependence. Frontiers in Psychiatry, 4, 61.