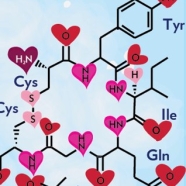 Valentine’s Day is a time for expressing love, and while its title may initially conjure up socially normative images of candle-lit dinners, long-stemmed roses, and canoodling with a romantic partner, I’d like to take this opportunity to talk about the kind of love that prevents our species from dying out: that of a mother and infant. The bonding that takes place in the first six months of life is complex and still quite mystifying, but likely involves the touch, attention, and care of the mother, as well as a whole lot of hormones. And one aspect of an infant’s first few months that encompasses all of these factors is breastfeeding. Not only is breastfeeding important for nutrition, including brain and body development, but it is also an important factor in the earliest stages of human social development. Here we will touch on just some of the science behind why choosing to breastfeed may lead to benefits for babies and their bonds with their mothers.

Breast milk contains all of an infant’s essential nutrients, and even if the baby’s mother consumes an amount of nutrients insufficient for both herself and the baby, the baby may still receive the appropriate nutrients through the breast milk [1]. Babies who are breastfed have an overall lower incidence of infectious disease [2] and are also more protected against specific types of disease. For instance, breast milk contains hyaluronan, a polymer known to increase antimicrobial defenses in newborns [3]. Furthermore, breastfeeding can reduce the risk of the very dangerous disease called necrotizing colitis which is characterized by intestinal cell death and may be fatal for premature infants [4].

Breastfeeding is also associated with healthy weight gain in infants, as four-month-old infants who were breast-fed were found to weigh more than a matched group of infants who were not being breast-fed [2]. However, recent evidence suggests that breastfeeding for longer in infancy leads to a lower risk of being overweight later in life [5].

A number of studies have shown that breastfeeding may be associated with minor increases in cognitive-behavioral function, as indexed by performance on cognitive and language tests designed for infants and on tests of psychomotor function [6]. In addition, changes at the whole-brain level have been associated with breastfeeding.

For instance, brain volume has been shown to correlate with the amount of breastfeeding in infancy. A recent study hypothesized that being fed a higher proportion of breast milk as an infant might lead to greater brain growth later in life [7]. Across a group of adolescents, a greater amount of breastfeeding during infancy was associated with higher verbal IQ; and furthermore, for males adolescents only, the amount of breast milk correlated positively with total brain volume (which correlated with verbal IQ, in males, but not the whole group) as well as white matter volume (which is composed mostly of the axons of a neuron that connect the surrounding cortex, or gray matter, across different regions of the brain). Interestingly, the cell-body-rich gray matter volume did not correlate with breastfeeding in any group, showing that only the connections between areas of cortex were affected by breastfeeding. The authors suggest that the dissociation between males and females is consistent with the literature on developmental differences in other animal species, but the reason for the difference is still unknown.

Breastfeeding may also have implications for neural development at the cellular level. The hormone oxytocin is released during breastfeeding, and (very interestingly!) also just prior to breastfeeding (to stimulate lactation)—for instance, when a mother hears a baby start to cry [8]. Scientists are beginning to learn more about how regulation of oxytocin works in the brain. We know oxytocin is important for social bonding, and there is lots of variation in its genetic regulation across individuals [9].

In rats, early nursing and care (licking and grooming) styles have been associated with epigenetic effects in babies [11]. Babies of mothers with less licking and grooming were found to be more stressed out, with the gene promoter for a glucocorticoid receptor (read: stress hormone receptor) being affected via methylation.

Since newborns’ brains are going wild developmentally, it stands to reason that oxytocin release in breast milk could have evolved in part as a mechanism to make sure that babies get their daily dose of that feel-good hormone, and also that they are calmed and soothed to ensure that healthy epigenetic changes can occur at the same time.

So breastfeeding is good because the milk is full of nutrients, and also because it can induce hormonal changes in mothers, which may have positive impacts on brain development and foster mother-infant bonds. But further, oxytocin or other aspects of breast-feeding may even change the way that mothers behave during feeding.

In a study of infants in the mid-’80s, researchers observed groups of children who were being either breast-fed or bottle-fed. They found that mothers who were breast-feeding were more likely to be touching their babies and were more likely to be looking directly at their babies [12]. This latter finding is particularly interesting because we know that infant-adult joint attention, such as an infant monitoring an adult’s gaze, is something that develops relatively early [13] and may be very important for learning about things in the world and in early word learning [14]. Impaired joint attention may even contribute to dysfunction in disorders such as autism spectrum disorders [15], where children are often delayed in language skills. (And autism is also associated with abnormal methylation of oxytocin receptor genes, in humans [10].)

Just like rats [11], babies who are not sufficiently cared after may develop poor stress responses. The notion of secure attachment to a caregiver (that is, feeling safe and a attached to a primary caregiver) predicts how well babies can cope in the world. Babies who feel securely attached exhibit less variability in heart rates [16] and show less cortisol response when confronted with new situations [17].

As these studies suggest, perhaps the most important aspect of breastfeeding is that it places infants in close contact with their caregivers are important. Skin-to-skin contact for infants and caretakers has been shown to lead to longer periods of quiet sleep and better vagal tone [18]—that is, a better parasympathetic system response to stress.

Now we have seen how secure attachment might be related to breastfeeding—more attention and touch from breastfeeding moms might lead to increased attachment on the part of the infant. But on the flip side, more securely attached moms might have a different neural response and a higher oxytocin response to their infants, thus changing both their own behavior and the hormones that a baby is exposed to [19]. Further, there is a negative correlation between levels of oxytocin released during breastfeeding and traits like aggression [20], anxiety [21], and depression [21].

There are certain plenty of reasons to consider breast-feeding, but sometimes, it is not possible. Current statistics from the CDC show that in the U.S., over three quarters of women breastfeed their infants at some point, though only about 38% are exclusively breastfeeding at 3 months and only 16% are exclusively breastfeeding at 6 months [22]. Should caregivers who are unable to breastfeed be very worried? Fortunately, the answer is no. The studies outlined above begin to paint a picture that the most important thing for infants’ development is the care they are given, and breastfeeding may be an important (though not crucial) part of this.

So it might be that highly sensitive caretakers are more likely to breastfeed, which is generally good for a baby—but that breastfeeding alone cannot explain all the benefits typically found in children who are breast-fed, especially those of the somewhat mysterious (and almost decidedly magical) properties of hormones like oxytocin. A loving caretaker is the most important thing, and that’s the note on which I’ll end this Valentine’s Day post.

← Please Please Me In a Chocolate-y Mood? →