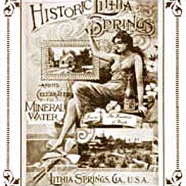 What comes to mind when you hear the word lithium? A drug used to manage life-threatening mood disorders? A potentially deadly toxin? A chemical found in trace amounts in many compounds in nature? (Or maybe just the Nirvana song?)

Any of these answers would be felicitous. A recent New York Times Sunday Review piece by psychiatrist Dr. Anna Fels touted the potential benefits of the naturally-occurring element, atomic number 3 on the periodic table. Dr. Fels’ primary argument was that lithium, widely known for its use as a mood stabilizer for individuals with severe mood disorders, also has a positive effect on mood and cognition in non-clinical populations in trace amounts. She explores two findings which have to this date not gotten much press time. First, higher trace amounts of lithium occurring in natural water sources are associated with lower rates of suicide in those communities. Second, lithium may act as a neuro-protective agent both in medical (therapeutic) doses for patients and in trace amounts, possibly contributing to reduced rates of dementia. Before exploring these findings, I turn to a brief history of the discovery of the element lithium and its use for medicinal purposes.

A brief wondrous history of lithium and medicine

Johan Arfvedson is credited with the discovery of lithium in 1817 by isolating it as a salt. By the middle of the century, lithium was being used for medical purposes, primarily to treat gout (a type of arthritis) and rheumatism [see Figure 1 for a brief medical history through 1971)], and by the end of the century artsy types likes Mark Twain were enjoying naturally-occurring lithium salt baths in locations such as Lithia Springs, GA. 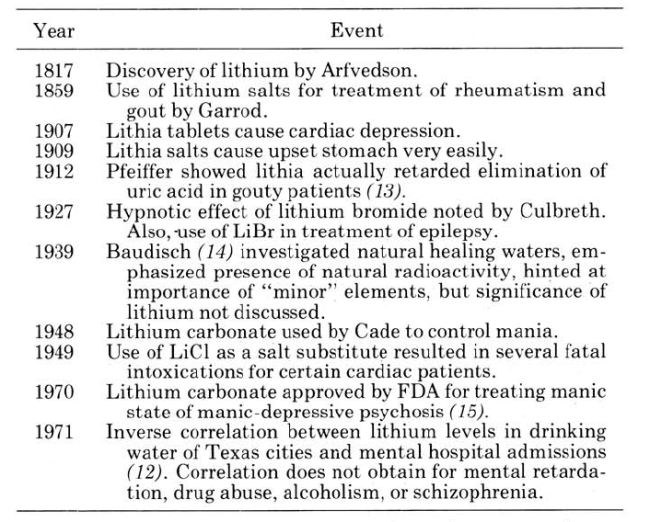 In 1948, lithium was used for the first time to treat mania, a state characterized as a heightened period of mood including both euphoria and irritability. In the first medical paper on the matter, Dr. John Cade writes of hospitalized manic patients who were, by turn, “destructive, mischievous, and interfering,” “continuously garrulous, restless, irritable, and euphoric,” and “noisy, elated, with marked distractibility and flight of ideas” (p. 350). In many of these cases, after administration of lithium citrate, patients responded quite positively to the drug, exhibited reduced manic symptoms, and became well enough to re-enter into the workforce.

The next year, reports were published that lithium could have fatal toxic effects. A compound called westsal® [1], composed of lithium chloride and potassium iodide, was being provided as a salt substitute to patients who had heart disease (arteriosclerosis) and were on salt-restricted diets. After having eaten food prepared with the substance for several days, multiple patients began to experience symptoms such as “…tremor, muscle twitches, apathy, difficult mentation, blurring of vision, confusion and, finally, coma and death” (p. 687). These were some of the earliest, though not the very first [2], reports that high doses of lithium could be fatally dangerous.

In lower doses, however, lithium has proved the opposite of deadly. By 1970, lithium had been approved by the FDA [3] as a treatment for manic-depressive (or bipolar) disorder. Today, it remains a widely-used treatment for bipolar disorder, especially beneficial during an acute period of mania and for prevention of suicide. However, even when administered at relatively safe, therapeutic doses, lithium remains a risk for renal (kidney) dysfunction, and individuals who regularly take lithium must have renal function monitored at regular intervals. Like many other substances (controlled or not), the moral of the story as far as lithium goes seems to be that in moderate quantities, it can be quite beneficial—but in excess, it can be deadly.

Trace amounts of lithium and prevention of suicide

As Fels points out, lithium has historically had a bit of a bad reputation. Its toxicity in large doses and association with mental illness do not make it a poster child for a natural remedy. Fels argues that it is. Lithium is present to varying degrees in natural water sources [see Figure 2]. Research from several countries has begun to suggest a link between the amount of naturally-occurring lithium present in the water and variables related to mood and cognition.

Figure 2. Map of trace levels of lithium from select areas of the United States. Taken from Ayotte et al., 2011 [5].

A first group of studies that Fels describes suggest that a greater amount of lithium may be related to lower rates of suicide. The first study to show such a link was published nearly 25 years ago in Texas, where the authors found that increased levels of lithium in a county’s drinking water were associated with a decrease in a host of variables, including rates of suicide, homicide, rape, and possession of narcotics. The study is intriguing, yet the data were analyzed in a way that make them susceptible to effects of outliers (rather than computing correlation on continuous measures of lithium levels and rates of suicide, the authors grouped counties into three groups and computed multiple comparisons between categorical groups). Interpreting causality is also an issue: there could be a third variable correlated with lithium that is responsible for the differences between the groups. For instance, though the authors mention that socioeconomic status was not associated with crime rates, such factors were not partialed out in analyses of the relationship between lithium and other measures.

The continued presence of associations between lithium levels in water and with suicide, however, suggest that the link initially reported in the Texas study is tenable. Studies from Japan, Austria, and Greece have also shown a negative correlation between lithium levels in drinking water and rates of suicide. As Fels notes, there is at least one study from England which reported no association between lithium levels and suicide rates, but a recent review paper on the topic suggests that a majority of the research supports the notion that increased levels of lithium in drinking water are related to decreased rates in suicide, and possibly other mood-related dysfunction.

The quantity of lithium examined in these studies is orders of magnitude smaller (see Figure 3) than the amount prescribed to patients for bipolar disorder. While the precise mechanisms of lithium are unknown, there is evidence that its contribution to preventing suicide operates by mechanisms different from those operating in reduction of mania. For instance, as the authors of the review on trace amounts of lithium and suicide suggest, the depressive episodes which often precede suicide are not particularly aided by lithium (though they are more responsive to other types of mood stabilizers, such as antidepressants). There are therefore likely different contributions of lithium to (a) stopping a manic episode and (b) preventing suicide, which typically follows depression, not mania. The authors suggest that the trace amounts of lithium in water may offer protection over a longer timescale and may act as neuro-protective factors (and possibly even promote neurogenesis, or the creation of new brain cells). Cconverging evidence from studies of links between lithium and dementia lend them additional support. [See next week’s post (Lithium Wonder Drug: Part 2!) for an analysis of the neurobiology underlying proposed mechanisms for neuro-protective properties of lithium.]

Figure 3. Relative quantities of serum levels of lithium in the body after being exposed to trace amounts, a clinical dose, or higher doses leading to toxicity or even death.

Lithium: A natural guardian against dementia?

Dementia is roughly defined as dysfunction of multiple brain systems, such as language or memory, observed primarily in the elderly. Although mood disorders, particularly depression, have been shown to be associated with the presence of dementia later in life, current research suggests that depression late in life may be a prodromal symptom of dementia, rather than a cause, while depression earlier in life may be a risk factor.

As Fels notes in her recent article, individuals with bipolar disorder may also be at greater risk for dementia, but the story changes once lithium is considered. One study found that when participants with a diagnosis of bipolar disorder continued use of lithium (as opposed to obtaining just a single prescription for it), rates of dementia were decreased compared to participants who were using other types of medication (including antidepressants, anticonvulsants, and antipsychotics).

Another line of research suggests that lithium may not only be a neuro-protective agent (thereby guarding against the degenerative processes contributing to dementia) but may actually promote neurogenesis. One study found that patients diagnosed with bipolar disorder who had been taking lithium, compared both to untreated patients and healthy controls, were found to have increased gray matter volume across the brain. While this study could not make many claims about causality due to the constraints of the methodology, a subsequent study took a longitudinal approach and replicated the results, finding that over the course of sixteen weeks of treatment, the prescription of lithium was positively associated both with gray matter volume and treatment outcome [Figure 4].

Finally, a very recent meta-analysis reviewed studies investigating associations between both medically-prescribed lithium and trace amounts of lithium found in drinking water and rates of dementia. The negative correlation between taking lithium for bipolar disorder and a decreased rate of dementia was observed in five out of seven studies reviewed. What’s more, all of the reviewed studies reporting clinical trials for Alzheimer’s disease showed benefits of lithium compared to placebo.

So far, the evidence indicates It is not controversial that lithium has properties which, when properly administered, may change brain chemistry for the better. Dr. Fels closed her Times piece by strongly advocating for further research into its therapeutic and neuro-protective properties: “Some scientists have, in fact, proposed that lithium be recognized as an essential trace element nutrient. Who knows what the impact on our society would be if micro-dose lithium were again part of our standard nutritional fare? What if it were… put into the water supply? The research to date strongly suggests that suicide levels would be reduced, and even perhaps other violent acts. And maybe the dementia rate would decline. We don’t know because the research hasn’t been done.”

Maybe we shouldn’t treat lithium like Kool-aid, but we might be better off if we snuck just a little into our water each day.

[1] Side note: All signs seem to suggest that there was a market for tasty salt substitutes at the time; as the authors of a similar report write, “In view of the increasing emphasis on restriction of sodium intake in the management of cardiac decompensation and other conditions, a harmless     substitute for salt in the seasoning of food has been widely sought and is much to be desired.”

[2] Similar symptoms were observed in an earlier study, during which a Dr. S.A. Cleaveland subjected himself to the study of the effects of taking different doses of lithium. During the highest dose, the doctor experienced near “prostration,” noting that “…the dizziness, weakness, and tremors were so intense that there was staggering and it was necessary to go to bed” (p. 722).

[3] Science News, Volume 97 (p. 390) points out that, in addition to its toxicity (at only 3 times the therapeutic dose), the delay in the approval may also have hinged on the reluctance of pharmaceutical companies who stood little to gain from selling the naturally occurring chemical lithium, which could not be patented.

← Why we LOL Kickstarting Science →