Home » Methods » The Importance of Being Roger Tsien 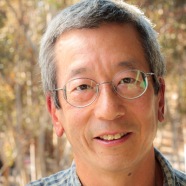 The Importance of Being Roger Tsien

Have you ever had a moment when you suddenly pause and realize how thankful you are for something that is incredibly mundane? So mundane that it is taken for granted on a day-to-day basis? We often forget that there was a time when devices like a washing machine weren’t considered mundane, but rather “marvelous,” “extraordinary,” “the greatest thing since sliced bread!”

In the spirit of Thanksgiving, I think it would be a good exercise to recognize the things in our lives that allow us to accomplish everyday tasks more efficiently, as well as the people who have worked to create those inventions. As a neuroscientist, I would like to share with you one such thing that has enormously impacted how we conduct scientific research: THE GREEN FLUORESCENT PROTEIN! This blog piece is a testament to how thankful I am for all the scientists who contributed to bringing this powerful tool to the laboratories across the world — most notably, the late Prof. Roger Tsien, whom we lost this past August. Along with Prof. Osamu Shimomura and Prof. Martin Chalfie, Prof. Roger Tsien won the Nobel Prize in Chemistry in 2008 for the discovery and development of the green fluorescent protein (GFP).

At this point, you’re probably wondering, what is this protein that  ‘glows’ green, and how does it make the lives of scientists easier? To understand the concept of fluorescence and how GFP works, we must first establish that different colors of light waves carry different amounts of energy: Higher frequency light waves with shorter wavelengths (e.g. violet-blue) carry more energy , and lower frequency light waves with greater wavelengths (e.g. orange-red) carry less energy. 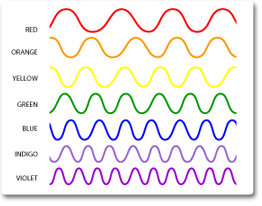 Remarkably, in the 1960’s, scientists discovered that this phenomenon was at work in a type of jellyfish, Aequorea victoria. In addition to GFP, Aequorea victoria contains a kind of protein called aequorin which generates blue light when calcium is bound to it. GFP absorbs blue light from aequorin and emits green light back out, hence the name green fluorescent protein. Upon isolating GFP from these jellyfish, scientists were able to get GFP to fluoresce in a laboratory setting by shining blue light onto it and observing what happens under a microscope. 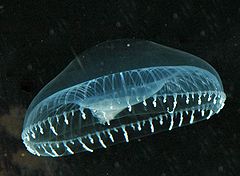 You might still be thinking, “Ok, so we have a green fluorescing protein. Now what?” To illustrate how useful this protein can be when studying biological systems, I’m going to ask you to think back to when you were a wee little elementary school student and you had to go on a field trip to the zoo or museum. You might recall that it was easier to distinguish where your group leader was in a sea of people if they were wearing a bright colored shirt. Similarly, when scientists seek to study a particular type of cell, it is extremely helpful to be able to pick those cells apart from the rest. This is where GFP comes in: GFP is often used as what we call a ‘fluorescent tag,’ meaning that we can ‘tag’ the cells we desire to study with GFP. These cells then fluoresce when we shine blue light onto them. 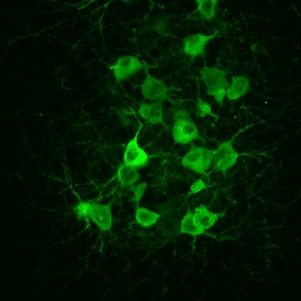 How do scientists tweak cells that, by nature, do not contain the GFP gene in a way that allows them to fluoresce green under blue light? This is possible because scientists were able to clone the jellyfish GFP gene and insert it into the DNA (genetic material) of their organism of choice. Below you can see a representative cartoon of a circular piece of DNA inside a cell.

The next question is, how do scientists insert the GFP gene into DNA? There are several methods that can be employed: The GFP gene can be inserted into the genome of the model organism at the embryo stage of its development. The insertion has to be specific to which cells you want to fluorescently tag, meaning that if you want to isolate cells that produce ‘protein X’ for instance, you would want to insert the GFP gene next to the gene for ‘protein X.’ This would allow only the cells that produce ‘protein X’ to produce GFP, thus revealing them as green under the blue light of a fluorescent microscope. To explain another method of insertion, I will draw from neuroscience: Let’s say that I only want neurons in a particular region of the brain to be fluorescently tagged. What I can do is I can inject a non-infectious virus carrying the GFP gene into a brain region of choice which would allow the neurons that take in the virus to start producing GFP.

The true impact of GFP’s discovery is not the fact that we can now make the cells of an organism fluoresce by expressing the GFP gene with other genes; it is that we can ask and answer big-picture questions such as, “Across the development of an organism (e.g. nematode worm, fruitfly, mouse, etc.), when, where, and how much does this important ‘protein X’ get expressed?” or “Which neurons do the neurons in the primary visual cortex synapse onto (i.e. contact)?

Furthermore, he significantly contributed to the development of calcium imaging, a technique that makes use of GFP and is used to measure the activity of neurons. During neural communication, calcium influx into the neuron occurs; therefore, GFP can be used as a fluorescent indicator of neural activity when fused with another protein involved in calcium signaling.

GFP’s discovery is a wonderful example of how much we can learn from Mother Nature, and how harnessing its power can lead to major advancements. The neuroscience community owes Roger Tsien a colossal debt of gratitude. He, along with many other scientists who have worked on the discovery and development of GFP, have created a ripple effect in multiple fields of science that will continue to grow for many many years. A big thank you to you, Dr. Tsien.

← Brain and Blood, Diseases and Drugs Stuff and Starve: A Means of Holiday Binging or Healthy Eating? →