Home » Decision-Making » THE OPIOID EPIDEMIC: A SOBERING VULNERABILITY OF THE HUMAN BRAIN

THE OPIOID EPIDEMIC: A SOBERING VULNERABILITY OF THE HUMAN BRAIN

Opioids are a class of powerful psychoactive drugs that are often prescribed for pain relief, but can produce an intense euphoria that has proven remarkably addictive.  Opioid use disorder, a diagnosis characterized by compulsive opioid use and withdrawal, affects or has affected approximately 3 million Americans and 16 million people worldwide.  According to the Centers for Disease Control and Prevention, 115 Americans die each day from opioid overdose, making it the leading cause of death of Americans under the age of 50.  Six out of ten overdose deaths in the United States now involve an opioid, a figure that has quadrupled since 1999, resulting in over half a million deaths since the turn of the millennium.  This ongoing opioid epidemic is thus the deadliest drug crisis in history, and yet little has been done to mitigate its severity. 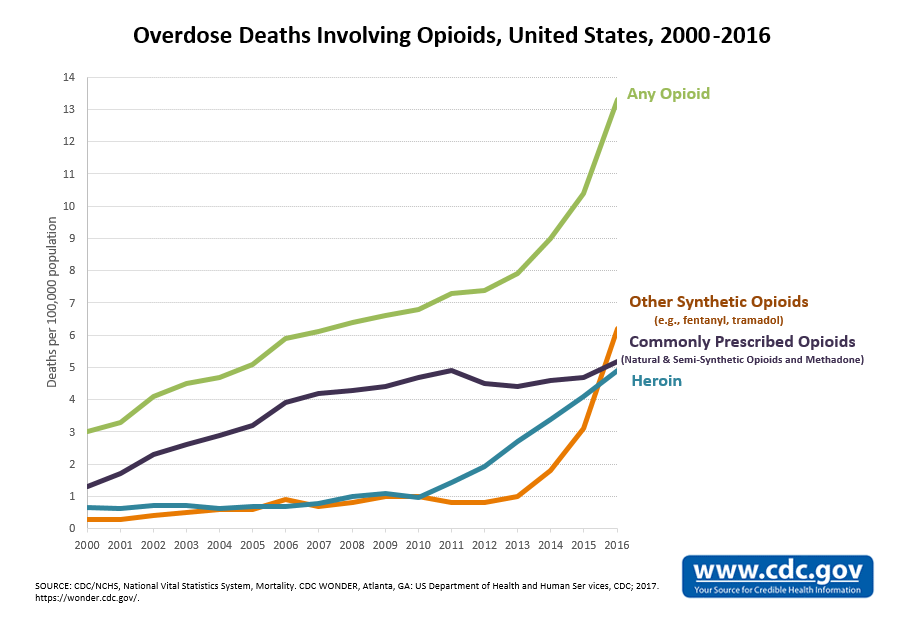 Part of the reason for this inaction is that drug crises are fraught with debate about the locus of responsibility for addiction and overdose.  Disentangling personal responsibility from neurological disorder is difficult, but one thing is for certain: addiction is a powerful agent in changing the incentives, and the underlying neurobiology, motivating behavior.  Understanding the biological mechanisms shaping behavior can thus be helpful in clarifying addiction not as a weakness of character, but as a fundamental vulnerability of the human brain.  My hope is this perspective can encourage a compassionate approach to combating the opioid epidemic based on treatment rather than incarceration.

Behavior results from sequential activation of various interconnected regions of the brain, integrating information about internal state and external environment and stimulating motor regions that produce action.  Generally, when neurons (i.e. brain cells) are activated in concert, chemical processes occur that increase the likelihood of being activated together again, much like creating a walking path through snow: as that neural path is used more frequently, it becomes more established, increasing the likelihood it will be used in the future. 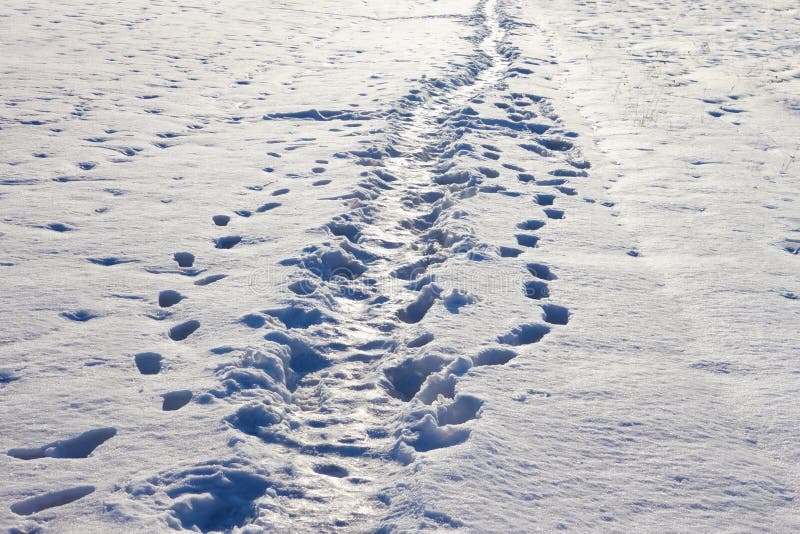 A footpath that is used more frequently is more likely to be used in the future since it’s easier to traverse.  In much the same way, a more frequently active neural circuit is more likely to be activated again in the future (photo source: https://www.dreamstime.com/royalty-free-stock-image-narrow-footpath-snow-trodden-sunny-winter-day-image35114156)

In decision-making and behavior, this process is mediated by a region of the brain called the ventral striatum, which is responsible for encoding whether an action produces a positive outcome.  For any set of sensory inputs, the brain selects from numerous possible actions in response.  If a behavioral response to those inputs produces a positive outcome, the ventral striatum releases a chemical signal called dopamine.  Dopamine serves to deepen the path in the snow leading to that behavior, strengthening the link between those sensory inputs and that behavior so it’s more likely to be selected in the future.

These brain structures are some of the most evolutionarily ancient brain systems, and have been conserved largely because they are extremely effective at reinforcing behaviors necessary for survival and reproduction.  However, the potency of this circuitry in shaping neural pathways leaves it susceptible to chemical manipulation that can have profound and lasting effects on behavior, even to the point of pathology.  Opioids are particularly effective at altering the activity of neurons in the ventral striatum, stimulating dopamine release and reinforcing behaviors associated with drug acquisition and consumption.  The result is a remarkable capacity for inducing compulsive drug-seeking behavior, often in spite of the user’s better judgment. 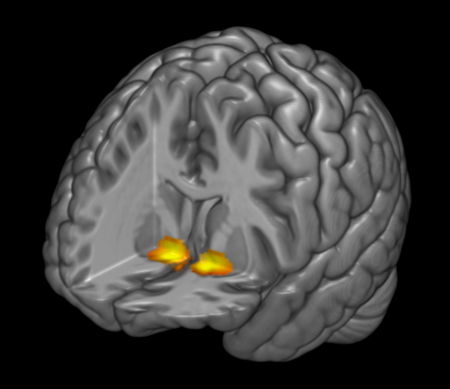 In addition to reinforcing opioid-seeking behaviors directly, opioids also inhibit the lateral habenula (LHb), a brain region involved in aversion whose primary function is to decrease selection of non-rewarding or aversive behaviors.  By suppressing activation of LHb, opioids discount contributions of negative outcomes associated with drug acquisition and consumption in the selection of behaviors, exacerbating the propensity to select drug-seeking behaviors despite untoward consequences and regardless of personal desires to the contrary

These effects can be compounded by early life stress or previous opioid exposure, both of which can induce changes in gene expression that increase the likelihood and severity of changes in sensitivity of these pathways.  To return to our snow path metaphor, it’s as if opioid use packs down the snow to structure the path, melts the snow so the path forms more readily when walked upon, and blows snow over all other paths so when the initial path leads to darkness, there are no options but to press on, agonizingly trudging through the deep powder.  This cycle of behavioral reinforcement can make it nearly impossible to overcome opioid addiction entirely without access to proper treatment, regardless of personal will and social pressure, making incarceration an ineffective solution for the neurological disorder underlying opioid abuse.

Like most severe psychiatric illnesses, there is presently no perfect solution to opioid addiction, but there are many policy improvements that could mitigate the severity of its personal and social repercussions.  Though more targeted therapies are in development, the current gold standard of treatment for opioid addiction is called medication-assisted maintenance therapy (MMT).  MMT involves regular oral administration of long-acting, low potency legal alternatives to illicit opioids (i.e. methadone, buprenorphine).  MMT serves two primary functions.  First, by producing low level activation of the same mechanisms responsible for the effects of opioids like heroin or morphine, MMT helps to curb the severe withdrawal symptoms that typically arise with abstinence, a common cause of relapse.  Second, by occupying these same mechanisms, MMT blocks other opioids from acting on them, eliminating the rewarding effects of illicit opioids and reducing their ability to sustain their control over behavior.  In contrast to illicit opioids, the low potency of the drugs used in MMT means they are unlikely to interfere with daily function in those recovering from opioid dependence, reducing the social costs and health risks associated with opioid use.  A meta-analysis of studies assessing the efficacy of MMT (Marsch 1998) demonstrated consistent, significant reductions in illicit opioid use, HIV risk behaviors, and drug and property-related criminal behavior in patients receiving MMT, supporting these benefits.

Unfortunately, fewer than 10% of those suffering from opioid dependence receive MMT, due in part to limited access.  Methadone treatment can be costly and its prescription is limited to specific facilities subject to substantial regulatory oversight.  Both public and private methadone clinics exist, but private clinics are often prohibitively expensive for low income individuals, and public clinics are too few in number to serve those in need effectively, resulting in extremely long waitlists or complete lack of reasonably accessible facilities.  Though buprenorphine does not require specific clinics, it is also subject to regulation that obstructs access.  In addition to high costs/co-pays, doctors must apply for and receive buprenorphine prescription waivers in order to prescribe, and are limited to a maximum of 100 buprenorphine-prescribed patients at a time.  More than 60% of rural communities lack a physician permitted to prescribe buprenorphine, and limits on the number of patients means access to treatment is insufficient given demand. Despite rapidly rising rates of opioid abuse, the percent of providers prescribing medication to treat opioid dependence has failed to keep pace, resulting in a dearth of available treatment for those suffering from opioid addiction

Despite declaring the opioid epidemic a public health emergency in October, the Trump administration has done little to address these problems.  Rather than sufficiently augmenting funding for opioid addiction treatment to increase the number of public MMT clinics, President Trump’s proposed 2018 budget included a $400 million cut to the Substance Abuse and Mental Health Services Administration, the main agency responsible for funding substance abuse treatment, as well as a 95% cut to funding for the Office of National Drug Control Policy.  President Trump has asserted an agenda based instead on increasing law enforcement and legal penalties associated with opioid sale and possession; this incarceration-based policy agenda has not only proven empirically ineffective, but ignores the fundamental pathology of addiction, criminalizing what constitutes a neurological disorder stemming from an inherently vulnerable brain reward system.

Though little of this proposed budget was signed into law in the recent omnibus budget passed by Congress in early 2018, it nonetheless reflects a misalignment of priorities on the part of the Executive Branch, which is primarily responsible for enforcement and implementation of federal drug policy.  The budget that was passed allocates a $6 billion increase in spending related to opioid abuse and mental health treatment over two years, but a negligible amount of this money is directed toward increasing the prevalence of public facilities for MMT, and this increase pales in comparison to funding increases toward other priorities.  Furthermore, experts on the opioid crisis suggest that a funding increase of “tens of billions of dollars” would be necessary to make a significant impact on a drug crisis of this magnitude (https://www.vox.com/science-and-health/2017/8/1/15746780/opioid-epidemic-end).  It is thus imperative that the administration does not continue its current approach, and instead focuses on facilitating and expanding access to treatment. 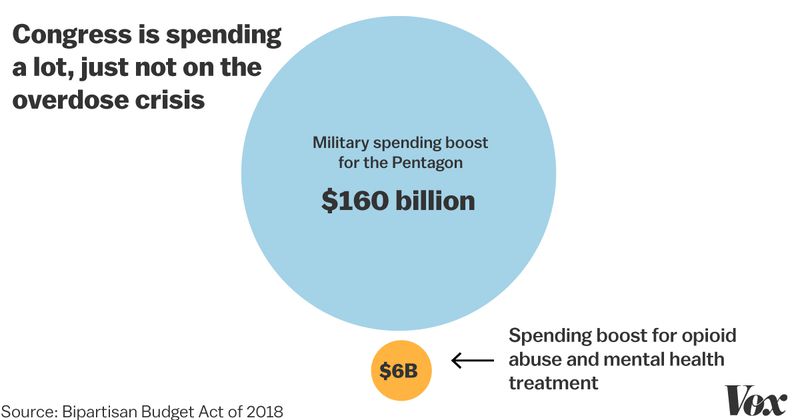 Federal spending to address opioid abuse does not meet the assessments of drug policy experts and pales in comparison to increases in spending toward other ends; the financial resources are available to increase treatment access, but this objective has not been prioritized in the recent federal budget (image source: https://www.vox.com/policy-and-politics/2018/2/9/16991340/opioid-funding-budget-deal)

Beyond treating the underlying addiction, there are also some harm reduction measures that could be implemented to reduce the number of opioid-associated fatalities.  Naloxone, a drug with the ability to displace opioids from their sites of action, has proven extremely effective at reversing the effects of opioid overdose and preventing overdose death.  However, naloxone must be administered promptly, before overdose symptoms can cause death (i.e. 1-3 hours).  Though some states and localities have reduced overdose deaths by passing laws permitting first responders (e.g. law enforcement officers, EMTs, fire fighters, etc.) to carry and prescribe naloxone, these measures have not been adopted at the national level.  Some states have further improved the chances of overdose survival by permitting purchase of naloxone directly from a pharmacist without a prescription, allowing for prompt bystander administration in case of overdose in vulnerable populations.  An additional obstacle to effective prevention of overdose death is the potential for legal repercussions in cases when emergency personnel are contacted for medical assistance due to the illicit nature of these drugs.  Thus, to reduce the rate of opioid overdose, not only should naloxone be made readily available without prescription or via first responders, but amnesty should also be granted in cases where overdose is reported to more promptly treat those in danger. 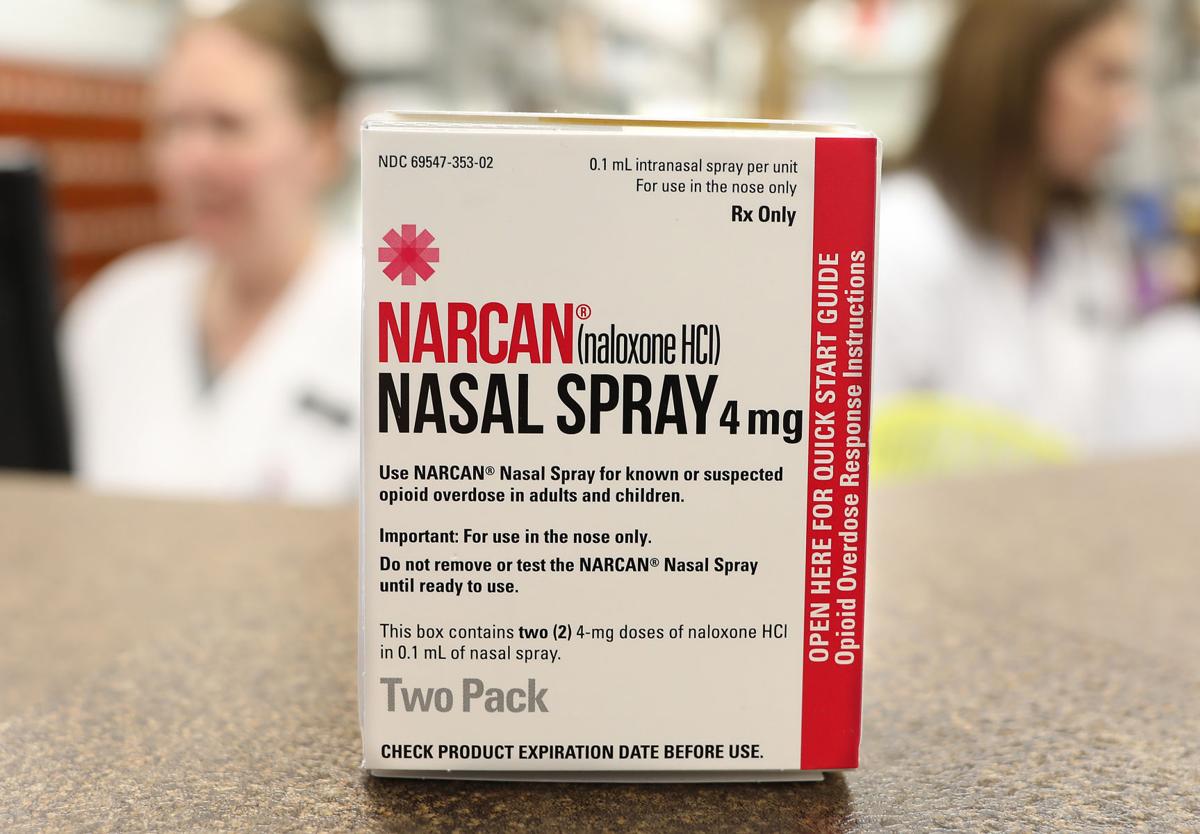 Naloxone nasal spray can successfully reverse the effects of opioid overdose and save lives, but access must be readily available in a timely fashion to do so (image source: http://siouxcityjournal.com/lifestyles/health-med-fit/iowa-law-provides-greater-access-to-opioid-antidote-but-treatment/article_08f81f54-af41-5088-9c8b-7620f829c2ba.html)

By understanding how these drugs can hijack the brain and drive behavior regardless of personal ambition or character, perhaps we can recognize opioid dependence for what it is: a neurological disorder due to the design of our brains.  Those suffering from this disorder deserve the same compassion we grant to those suffering from other mental illnesses, and our proactivity in reducing harm and expanding treatment in order to resolve this public health crisis.

Landon Klein is a sixth-year Ph.D. student in the UCSD Neurosciences Graduate Program.  Landon’s passion for sensible drug policy stems from his personal experience with loved ones falling victim to opioid abuse and overdose, and his recognition of the insufficiency of our current policy solutions to address casualties of drug addiction.  He hopes that our society can one day recognize individuals suffering from drug addiction as fellow humans rather than statistics, as victims in need of treatment rather than criminals, and as worthy recipients of compassion, support, and rehabilitation, in order to spare others a similarly tragic fate.

← The animals snakes have nightmares about Titrating your trip: Microdosing and mental health →