Home » Animals » The Big Sleep: How We Hibernate 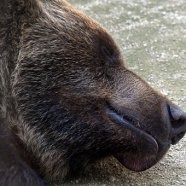 The Big Sleep: How We Hibernate

As December deepens, we rapidly find ourselves coming up on the first day of winter. Though winter officially begins on the 21st, many animals began their preparations for the season far earlier this year. Any birdwatcher could easily tell you that most birds migrated south a long while ago, and any hiker could tell you there’s not a chipmunk to be found along the trails. As the environment changes dramatically at the end of every year, so do the behavior of animals to survive it. One of their main strategies is hibernation. Nearly everyone knows what hibernation is, but few (even in science!) could tell you why it happens or what controls it. As climate change accelerates and the seasons become more and more unpredictable, a good understanding of hibernation and similar processes will become crucial to understanding how animals respond to and survive the changing of the seasons, the climate, and the ecosystem at large.

What exactly happens to these animals when they hibernate? The changes that occur are extremely dramatic.1 First, the animal enters a sleep-like state, lying down and ceasing motion.  Next, their heart rate drops from hundreds of beats per minute to below ten over a few hours. Breathing rate, kidney activity, and oxygen use then falls precipitously over the next 12 hours. Finally, body temperature, which animals spend most of their energy maintaining, falls from 98 degrees Fahrenheit to under 50. Such a dramatic decrease is extreme: in humans, anything below just 95 degrees is considered hypothermia, while anything below 70 is considered incompatible with survival (the aforementioned reductions in heart rate, breathing, and kidney function would also be similarly lethal). This process of controlled, decreased activity is actually known as “torpor”. When we discuss hibernation, we mostly just refer to the long-term, seasonal adoption of these changes by certain animals.

Within the animal kingdom, hibernation is surprisingly rare, and torpor even rarer. The only animals known to hibernate are possums, bats, anteaters, lemurs, rodents, and bears.1 Despite being the first to come to mind when we think of hibernation, bears display the fewest changes. Bears do not really enter torpor.2 Instead, their bodies only change a little bit, remaining in a state more like extended sleep, which also allows them to wake at any moment, unlike torpid animals. As a result, the seemingly simple question of whether bears hibernate is surprisingly controversial among scientists in the field, with little consensus.

Given that animals hibernate in the winter, we would think that animals know to begin hibernation based on features of the season that influence survival, like availability of food or even possibly ambient temperature. These animals are “facultative hibernators,” where their hibernation is optional but facilitates survival in response to certain environmental conditions.3 Some, like hamsters, use direct food availability as a signal, and the removal of food at any time of the year can trigger torpor.If food remains plentiful, torpor will not occur.4 Other animals use more indirect signals that indicate winter is coming, such as the length of the day.5

However, not all hibernating animals look to the world around them when making their decision. These animals, which include some squirrels and marmots, are “obligate hibernators”, where they are obliged to hibernate, independent of environmental conditions. Instead, their hibernation results from an annual cycle independent of food, temperature, or the length of the day. If you put a squirrel into a room with an abundance of food and constant light and temperature, it will still begin to hibernate at the beginning of winter.6 Obligate hibernators appear to follow an annual internal cycle, which is itself extremely opaque. No one yet knows how the cycle is set, what controls it, or how it can be changed, regulated, or abolished.

How do animals hibernate?

If obligate hibernators’ method is so mysterious, what about the facultative hibernators? Fortunately, we know far more about how they hibernate each year. However, their routines are extremely diverse, with almost as many methods as species. Most of this diversity results from what each species orients itself to when beginning hibernation. As a result, we can simplify these numerous diverse processes into two broad groups based on their respective modes of induction, each of which work in their own distinct manner.

The second is based on food availability. Food availability is partially communicated by the hormone leptin, which is produced by fat cells to signal adequate nutrition under normal conditions. However, as food becomes less available and fat stores decrease, leptin production also falls as well, serving as a potent signal to start conserving energy. When leptin levels fall too low for too long, rodents then tend to enter torpor, which can be reversed by treatment with leptin.12 Further, leptin production is also decreased by melatonin, allowing day length and food availability to work together to control hibernation.

While day length-induced hibernation only results from one brain area, the suprachiasmatic nucleus, fasting-induced torpor and hibernation control is far more distributed. The first region implicated was the raphe pallidum, a part of the brainstem mediating body heat generation.13 However, this region mostly just relays signals from the brain to relevant nerves, with little ability to control entry into and exit from torpor. This summer, two groups simultaneously discovered the neurons that do not just send signals to the raphe pallidum, but that control torpor as a whole.14,15 These neurons are genetically-defined and make up a small, but specific group within the preoptic area of the hypothalamus, a region previously implicated in control of body temperature.16 By activating these neurons in the brains of mice, the researchers were able to induce torpor.Then, when the animals had abstained from food, inhibition of these neurons prevented torpor from occurring. These neurons themselves send signals to the dorsomedial hypothalamus, a nearby region controlling body weight, circadian rhythms, and energy balance. The neurons here then connect to the raphe pallidum, inducing the changes in temperature through this relay. From these studies, scientists in just two years have been able to determine most of the brain regions and their connections involved in fasting-induced torpor, a remarkable achievement.

Despite these features being identified in mice based on particular aspects of their species’s behavior, these results carry great implications for potential human applications in the future. The ability to hibernate, to go into torpor on command, would be extremely useful if possible to reproduce in humans. By entering into a state of suspended animation, we could in a way “pause” biology, greatly decreasing resource consumption and slowing bodily processes, potentially increasing survivability in cases of extreme scarcity, both in terms of time and resources. Human hibernation would make a science fiction future a reality, permitting explorers to survive decades-long journeys into space, or putting someone with lethal injuries into stasis. However, before we can even dream of doing any of these things, we first must understand the basics of how hibernation works in far more detail. Luckily, this seemingly-obscure phenomenon has begun to receive more and more attention, and the pace of discovery seems to be speeding up in kind.

← BRAIN ORGANOIDS AND ITS ETHICAL IMPLICATIONS The Earth is Flat: A Psychology Perspective →