Recently I was lucky to spend seven days on a catamaran out at sea with a small group of (COVID-vaccinated) friends. We traveled around the Gulf of California, witnessing truly amazing sights like manta rays jumping out of the water, sea birds diving into the water, and turtles floating along in the swell. This was […]

How Neuroscience Tools Can Help Patients Regain Their Vision

Biomedical scientists, including many neuroscientists, often get into the scientific research game with the goal of seeing a future in which their work can directly impact human health and wellbeing. There is often a disconnect, however, between the long hours in the lab working with cells, rodents, or computers and the eventual future applications of […]

Join Dennis Eckmeier on an expedition from neuroscience to science communication

Today I invite you to join me on an expedition with Dr. Dennis Eckmeier through the academic jungle to the realms of science communication. You will learn about the courtship calls of Chinese fire-bellied toads, a blowfly flight simulator, the vision of zebra finches (yes, finches, not fish!), and how the memory of smell might […]

More than a feeling…

As animals with brains, we are challenged to make sense of a world full of rich sensory experience.  There is a world created inside of our brains that we may see, hear, touch, taste, or smell.  Built out of our senses, humans possess an innate ability to extract patterns and other meaningful features from the […] 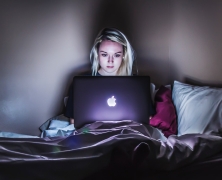 How Light Leads to Darkness: A Neural Link Between Nighttime Light and Depression

Nighttime light exposure can lead to depression. A new study brings us closer to understanding why, and what we can do about it.

While reading articles online, you may occasionally stumble across headlines like “Scientists find fear center of the brain,” or “Could this really be where the mind resides?” You might have also heard a TED talk where the speaker discusses how they discovered a part of the brain that makes decisions. Such expressions can take more […]

Why do neuroscientists study weird animals?: A primer on neuroethology

Why do neuroscientists study weird animals? And I don’t mean borderline weird; I mean the kind of extraordinary animals that can create electric fields and lift 100 times their body weight. The sort of animals that can camouflage despite being colorblind and can capture flying prey in fractions of a second. The kind of creatures […]

Your Mind on Trial

The British television series Black Mirror has, at times, been disturbingly prophetic. In season 2’s The Waldo Moment, a crude comedian runs for Parliament to disparage the system only to find himself a front-runner. In April 2019 Volodymyr Zelensky, a comedian who had previously played the role of Ukranian President on a popular TV show, […]

Stars for Eyes – The Neurological Wonder of the Star-Nosed Mole

Beneath the eastern wetlands of Canada and the United States, there lives underground a bizarre and unique animal with an impressive list of evolutionary adaptations. This creature holds the world record as fastest eater among mammals [1], can smell underwater [2], and has a very unique sensory organ that basically operates as its eyes [3]. […]

Snake Eyes: The Fear That Built Your Brain

Indiana Jones is a quintessential American hero, his fedora, satchel, and whip instantly recognizable around the world. He lives a double life, a scholarly professor of anthropology in public and a globetrotting treasure hunter in private. He defeats the Nazis and always gets the girl, displaying daring and fearlessness, with one notable exception. He has […]