Home » Cognition » How Does Exercise Improve the Brain? 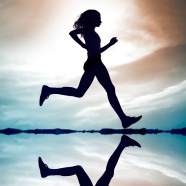 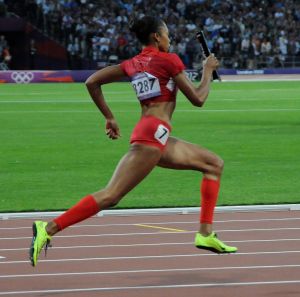 When I started college, my best friend and I
started a regular workout schedule to evade
the infamous freshman fifteen. The odds were
already out of my favor when I started to work
at the dining hall right next to my freshman
dorm. We were not as intense as Olympic runner
Allyson Felix pictured above. Twice a week we
would wake up just after sunrise and go running
for 20-30 minutes followed by stretching and
moderate weight lifting.
Our reward: breakfast and new brain cells.

Here’s a no-brainer: Exercise is good for you. Doctors, the media, scientists, and advertising are all constantly telling us to exercise more. There are a wide variety of health benefits, and I am just going to focus on one of the many great things that happens to your brain when you exercise – it’s called neurogenesis, which is the birth of new brain cells that will develop into neurons. As adults, neurogenesis occurs in two distinct parts of our brains: thesubventricular zone and the dentate gyrus of the hippocampus (see MT’s post). The hippocampus is very important for the formation of memories. Newborn brain cells play an important role in learning and memory. The effects of exercise on hippocampal neurogenesis and hippocampus-dependent tasks have been extensively studied.

noun: neurogenesis
1. the growth and development of nervous tissue.

Researchers looking at the brain effects of exercise show strong links between exercise, neurogenesis, and enhanced performance on specific cognitive tasks. In rodents, exercise can double the normal amount of neurogenesis in the hippocampus [1, 2].

To measure neurogenesis and cell survival in brain tissue, BrdU (bromodeoxyuridine) immunolabeling is used to mark cells that are actively dividing at the time of injection, and NeuN can be used to mark neurons. In order to test how exercise affects neurogenesis, animals are placed in cages with running wheels and compared to animals in cages without wheels. 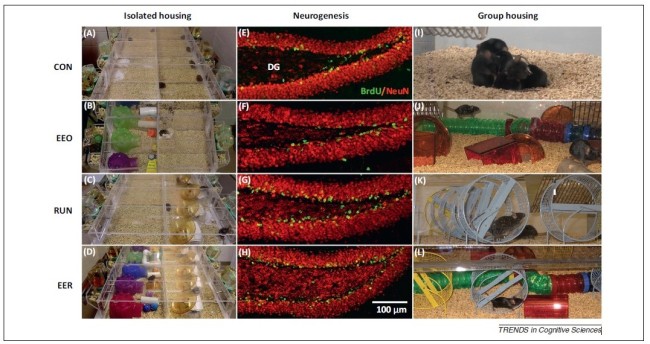 Studies show that living conditions with both running wheels alone (C and K) and running wheels with other types of environment enrichment (D and L) can enhance neurogenesis compared to empty cages (A and J) and enriched environment without wheels (B and J) [3,4]. The greenish yellow cells in panels E-H represent dividing cells in the dentate gyrus of the hippocampus. Figure adapted from Voss et al 2013 [18].

The hippocampus is also important for other types of memory like remembering context, recognizing new items, and being able to remember the difference between two objects. Running exercise enhanced context memory when animals were tested for contextual fear conditioning and passive avoidance learning (remembering where a fearful experience occurred) [6-9]. Running also improved performance on pattern separation tasks (identifying whether two objects are the same or presented in the same location) and novel object recognition (rodents spend  more time with an object that is new) [6, 10]. There are also human studies that show long-term aerobic exercise can enhance visual pattern separation [11], a task that involves the hippocampus. While neurogenesis was not directly manipulated in these experiments, we already know neurogenesis increases with exercise and it may play a role in these cognitive enhancements.

Exercise as therapy for cognitive decline

Because exercise can increase the rate of new neurons forming, exercise could possibly be used as a therapy in cases where neurons are dying. Rodent models of degenerative diseases including Alzheimer’s Disease and Down syndrome have been used in exercise experiments and showed that running can increase neurogenesis, which can potentially be a mechanism for improving cognitive impairments [12-14]. Indeed, human studies on people with dementia or mild cognitive impairment have shown that aerobic exercise can enhance cognitive function [15-17].

So I should exercise?

YES. I cannot say that running helped my friend and I get straight A’s in college, but we got pretty good grades and I like to think exercise helped with the great amount of school-induced stress. Right now there is no way to look at neurogenesis in humans while they are alive, so the best read out we have for humans are exercise-induced improvements in some cognitive tasks. I bet my friend and I could totally ace those memory tests after a good several weeks of working out.

There are so many more benefits from exercise than what I wrote about today. Neurogenesis is just one of the improvements that happens in the brain after exercise. There are also changes in brain cell structures, neuron excitability, and gene expression that can contribute to the cognitive enhancements from exercise. If other reasons like weight control, cardiovascular health, or stress reduction are not enough motivation for exercise, try running to benefit your brain.

← Let’s Talk About Sleep Creativity and mood: the ups and downs of bipolar disorder →