Home » Español » “It ain’t about how hard you hit”

“It ain’t about how hard you hit”

Have you ever felt your brain bouncing inside your skull after you got your head banged? Or have you ever hit your head so hard that you felt the world spinning around you like you were totally wasted?

This is how Shannon Gugerty, a professional MMA (Mixed Martial Arts) fighter, describes his experience with traumatic brain injuries (TBI).

Shannon has been involved in combat sports for a long time, as an amateur and later, as a professional fighter (including part of his career in UFC). His first professional fight happened in 2004, which he won. After that Shannon won all of his fights until, during one of his training sessions while sparring, he got badly kicked in the neck and got rocked (slang referring that feeling of dizziness and loss of coordination without really getting knocked out/unconscious). What happened to Shannon that day was probably his very first concussion/TBI although it was not as bad as the ones that came years later.

A ping-pong ball inside the skull

I have been practicing Muay Thai for over a year now. As soon as my sparring partners find out I am a neuroscientist, the most common question I get asked is what happens to our brains when we get punched in the head and, worst case scenario, knocked out (loss of consciousness). When your head gets banged, what you are experiencing is a TBI. Depending on the nature of the bang, it can be considered acute or chronic (aka chronic traumatic encephalopathy, CTE, and originally called dementia pugilistica).

An acute TBI, in contact sports such as Muay Thai or MMA, is a precise punch or kick to your head that will leave you unable to continue fighting. Sometimes, TBI may involve loss of consciousness, due to a momentary drop in the blood flow to the brain, because of the heavy, violent hit. Rapid acceleration and deceleration forces (the punch or the kick) on the head and jaw transmit to the brain and cause the stretch of the components there (neurons, glial cells and blood vessels). It may cause a concussion, a hemorrhage or another kind of structural damage like skull fracture or edema (swelling of the brain). At the cellular level, there is an accumulation of “unwanted” molecules, substantial electrical change in the neurons (depolarization) resulting in the reduction of neuronal energy and axons being pulled apart, all leading to neuronal death. These injuries do not just happen in combat sports; in recent years many injuries have been reported among American football players (check out Ethan’s post)

After what looks like it was Shannon’s first TBI, he was done training that day but he was back on track the week after, sparring again. Shannon now regrets that decision as he reflects on what happened and reckons that he should have rested for longer than merely a week. He is right. After a symptomatic concussion, like the one Shannon experienced, 24 to 48 hours of rest are recommended and 7-10 days to fully recover from an acute concussion. However, magnetic resonance, electrophysiology and psychological studies showed that the concussed fighters need at least 30 to 45 days to get their brain back to normal1,2,3.

After that first TBI, Shannon got by for a good couple of years without ever getting knocked out or even rocked again, winning ten fights in a row when he signed a contract with UFC. It was during that time when, once again while training, he got the hardest hit that he remembers. A punch right to his head made him hear a loud buzzing noise inside his head, his brain “felt like a ping-pong ball inside the skull, bouncing”, as he describes it. But he kept going and the trouble came a bit later, when he was home laying down and his head started spinning “like if I had drunk too much. I was throwing up and totally out of balance”. He describes quite accurately some of the symptoms that you expect from a concussion like dizziness, nausea and mental confusion. On both occasions, Shannon did not get medical attention and again he was back training the week after.

Shannon’s last professional fight ended up with him in the hospital for a CT scan. The punch his opponent threw in the 3rd round of the fight caused non-stop vomiting and an intense headache once the fight was over, but medical tests came up clean. However, two days later he suffered from a terrible depression that lasted for a while and he recalls getting long lingering headaches in response to any little hit in the head. In view of the situation, Shannon decided to quit professional fighting before things could get worse as he wanted to “save his neurons” from more dire consequences. Now he is a Jiu Jitsu coach, a combat sport that involves a lower risk of hits in the head.

CTE (quite common in long-term injuries among boxers) consists of a build-up of injuries that, although not sudden and fatal, will eventually cause some degree of damage in the brain. It depends on the number of injuries that one accumulates and even some genetic predisposition that makes one more vulnerable4. Therefore, the longer you are exposed to hits in your head, the more chances you have to develop CTE. CTE can show up years after retiring from the sport and its hallmark is an unusual accumulation of tau protein, the same tau protein in Alzheimer’s disease (check out this slideshow by the Alzheimer’s association).  This DOES NOT mean that if you practice a combat sport, surely you will suffer from Alzheimer’s disease. Tau protein accumulation occurs mainly around the area of the injury and levels of the protein usually come back to normal after a few weeks of recovery5. CTE is divided into four different stages, stage IV being the one where the structural changes in the brain (reduction of the brain weight, aggregation of tau protein) and different clinical symptoms associated (loss of memory, irritability, headaches, depression, etc…) are more prominent. 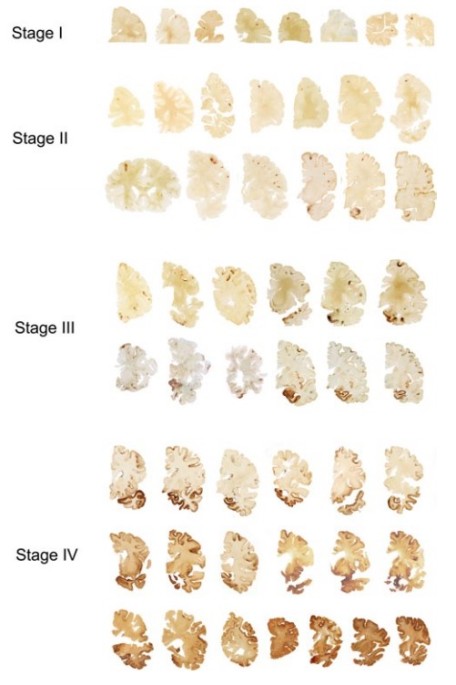 Brain sections of the four different stages that CTE is divided. Damage in the normal structure of the brain is observed at stage IV, when neurodegeneration is more severe and may cause memory loss and dementia. Image taken from The Neuropathology of Sport, Ann C. McKee et al. (2014). Acta Neuropathol 127:29-51

Quantity over quality (of the hit)

“It ain’t about how hard you hit. It’s about how hard you can get hit and keep moving forward”. That is the boxing analogy that Rocky Balboa used to explain how hard life is. But he was not that right from a scientific point of view when it comes to contact sports.

A very recent and interesting study6 on mice showed that repeated TBI (with loss of consciousness i.e. mice were actually knocked out) over long periods of time resulted in progressive brain damage that remains for at least a year after. Mice that received a single TBI spontaneously recovered without much problem within three days of rest.

Additionally, the study showed that a single TBI caused loss of spines (the protrusions in the dendrites of neurons that contain the post-synaptic machinery making communication with the pre-synaptic neuron possible), regardless of the severity of the impact. The same phenomenon was observed in response to repeated TBIs when the interval between the hits was at least 7 days, giving the mice enough time to recover between TBIs. However, when repeated TBIs were inflicted without a resting period in between injuries, spine loss did not happen, probably due to the neurons habituating to the TBI. Spine loss could be an adaptive and protective strategy for the neurons in order to avoid worse consequences (like an excessive influx of calcium that could trigger cell death mechanisms), something that has been hypothesized for other disorders like stroke.

In short, repeated TBIs may contribute to lasting brain damage. So, it ain’t about “how hard you can get hit”, as Rocky said, but about how many times you get hit and the time of recovery between hits, at least regarding permanent damage in your brain. Hence the importance that the injured fighter does not expose her/himself to new TBIs before total recovery.

Despite the risks that combat sports such as Muay Thai or MMA entail, my intention is far from scaring anyone off from trying any of these sports. Advances in research and medicine have made the prognosis, diagnosis and treatment of TBI and CTE much more effective than years ago. The risks are minimum at beginner’s level and even at amateur level, at which the protective gear makes harder to get bad brain injuries. Plus, the benefits are enormous at many different levels, improving your fitness, confidence and stamina. There is no more risk in practicing these sports than any other physical activity. Trust me, I’m a scientist.

I would like to thank Shannon Gugerty to take the time to talk to me and share his story.