Home » Neuroscience » Breathe the Pain Away: Mindfulness and Chronic Pain 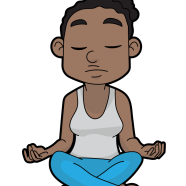 Breathe the Pain Away: Mindfulness and Chronic Pain

Posted by Drew Schreiner on April 11, 2019 in Neuroscience, pain, Perception | Leave a comment

Focus on your breath. Notice the sensation of air flowing in at the tip of your nose, of your chest expanding, and your shoulders rising.

Paying attention to the breath is one of the basic components of mindfulness meditation, a practice with ancient roots that has gained some modern attention. Practitioners of mindfulness have touted its benefits for all sorts of issues, including claims that mindfulness promotes well-being, or that it eases anxiety or depression. Outside of general mental health, advocates also claim mindfulness practices can reduce physical pain. 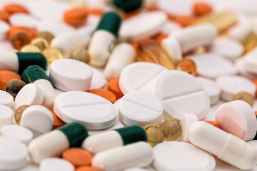 Chronic pain affects around 60 million people in the United States [1]. Current treatments revolve around addictive painkillers, including opiates like Vicodin or Oxycodone, leading addiction researchers to blame this approach for contributing to the national opiate addiction epidemic. If something as simple as mindfulness meditation could effectively treat pain – especially chronic pain – it might stop this flood of prescriptions and do so without any side effects.

The first question is: does it work, and if it does – how?

Pain is multidimensional. This has been recognized for a long time; the Sallatha Sutta, an ancient Buddhist text, asserts that when someone is in pain it is as if they are “pierced by two darts, a physical and mental dart.” This mental dart is particularly pernicious in chronic pain, where the prolonged nature of the pain can lead to intense feelings of helplessness, anxiety, and fear.

The Sallatha Sutta also provides what may be the first endorsement of mindfulness meditation to mitigate pain. It claims that well-trained meditators are “pierced by the first but not the second dart.” These ancient claims are now being scientifically investigated.

Be Mindful of Methods

Claims about meditation are a bit tricky to investigate. This is in part due to the placebo effect and the need to “blind” participants. The placebo effect is a phenomenon where subjects in a study will report feeling better even if they are given a treatment that has no physical effect (like an inert sugar pill). The effect is more pronounced if subjects believe that they are in the treatment or “real” group. This means that subjects need to be blinded – they must not know whether they are getting a real treatment or the placebo control.

Many early mindfulness meditation studies lack these crucial controls (and sometimes they lack controls entirely). A related concern about research into the effectiveness of mindfulness meditation is controlling for non-specific effects. These non-specific effects could include social interaction with the facilitator, physiological effects from slowed breathing, and general relaxation. Some of these non-specific effects might be involved in the many health benefits advocates claim for mindfulness. For instance, slow, relaxed breathing appears to reduce pain [2]. Mindfulness studies that don’t control for slow breathing and/or relaxation might therefore erroneously conclude that mindfulness is responsible for pain reduction.

How do we know that meditation provides benefits above and beyond any of these non-specific effects?

A group of researchers led by Dr. Fadel Zeidan, now at the University of California San Diego, have sought to address these concerns. In their studies, they often have 4 different groups, all of whom are un-trained in mindfulness meditation. The four groups are: mindfulness meditation, sham meditation, placebo-control, and a final control group [3].

Subjects in the mindfulness meditation group are instructed to focus on the changing sensations of the breath and to acknowledge when they become distracted before bringing their attention back to the breath. The sham meditation group was told they were in the mindfulness meditation group (thus “blinding” them), but they were instructed only to breathe deeply, missing the specific instruction for focus on the breath. The placebo-control group received a cream that they were told was pain-relieving, and the control group simply listened to an audiobook, a manipulation not expected to reduce pain. Both before and after four 20 minute sessions, subjects were exposed to a painfully hot sensation while researchers scanned their brains.

The results showed that mindfulness meditation was remarkably effective at reducing both the physical and especially the mental aspects of pain [Fig.1]. Those trained in meditation experienced a 27% reduction in the physical aspect of pain, termed pain intensity, and a 44% decrease in the mental aspect of pain, termed pain unpleasantness. The sham meditation group experienced only an 8% reduction in pain intensity, and a 27% reduction in pain unpleasantness. These results highlight the need for proper control groups, since, although sham mindfulness was also effective at reducing pain, it was not as effective as actual mindfulness meditation.

To contextualize this result, in a Tedx presentation, Dr. Zeidan mentions that “using the same pain scales and the same thermal stimulation paradigm our colleagues found that one clinical dose of morphine reduces pain by 20%.” Dr. Zeidan and others have replicated this result  [3,4], suggesting that mindfulness meditation may indeed be a promising treatment for pain. Importantly, only four, 20 minute training sessions were needed to observe this pain reduction, highlighting the accessibility of mindfulness.

The Mindful Brain on Pain

Current evidence suggests that meditation is effective at reducing pain (especially subjective ratings of pain unpleasantness), but how does it work?

Dr. Zeidan and colleagues scanned subjects’ brains in an fMRI as they were experiencing the painful stimulus [4]. They found that the orbitofrontal cortex (OFC), a brain region located just behind the eyes (Fig. 2), was associated with mindfulness-based reduction in pain unpleasantness. This region is also implicated in generating the context or meaning of pain. In the same Tedx talk, Dr. Zeidan mentions that subjects reported “they were able to experience the pain but simply let it go” in a quote reminiscent of the Sullatha Sutta’s ancient claim that meditation reduces the impact of the “second dart” of pain. 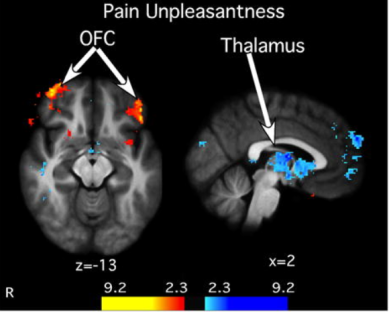 Dr. Zeidan and his colleagues also found that deactivation of the thalamus, located deep inside the brain (Fig. 2), predicted meditation-induced pain relief. Dr. Zeidan notes “no information from the body except for the sense of smell can enter the brain without first going through the thalamus” and that “it’s as if the thalamus is a gateway to pain and mindfulness seems to close the gate.”

The biggest open question in mindfulness-induced pain relief is: will it also work in chronic pain patients?

Patients with chronic low back pain experienced a reduction in pain intensity and an increased ability to cope with the pain following extended mindfulness training (8 weeks) compared to patients enrolled in a pain health education group [6]. Another study found that mindfulness meditation and cognitive behavioral therapy were equally effective at reducing chronic low back pain [7]. While intriguing, these studies and others attempting to study chronic pain generally lack the all-important sham meditation group, so it is difficult to know if mindfulness really does reduce chronic pain more than control conditions, especially since cognitive behavioral therapy and mindfulness appeared to be equally effective in the above study.

Though more research is needed, mindfulness meditation clearly has promising potential to help treat pain in an entirely novel way, without the many destructive side-effects of current drugs. In trying to treat the two darts of pain – the physical and the mental – both ancient practitioners and modern scientists may have hit the bullseye with mindfulness meditation.

[4]  Zeidan F, et al. Brain mechanisms supporting the modulation of pain by mindfulness meditation. The Journal of neuroscience : the official journal of the Society for Neuroscience. 2011;31:5540–5548

[5] Zeidan F, et al. Mindfulness-Meditation-Based Pain Relief Is Not Mediated by Endogenous Opioids. The Journal of neuroscience : the official journal of the Society for Neuroscience. 2016;36:3391–3397.

Pills: provided by Pixabay on Pexels.com

← Looking beyond biology: Autism in the workforce BRINGING JOY BACK TO CHILDBIRTH →